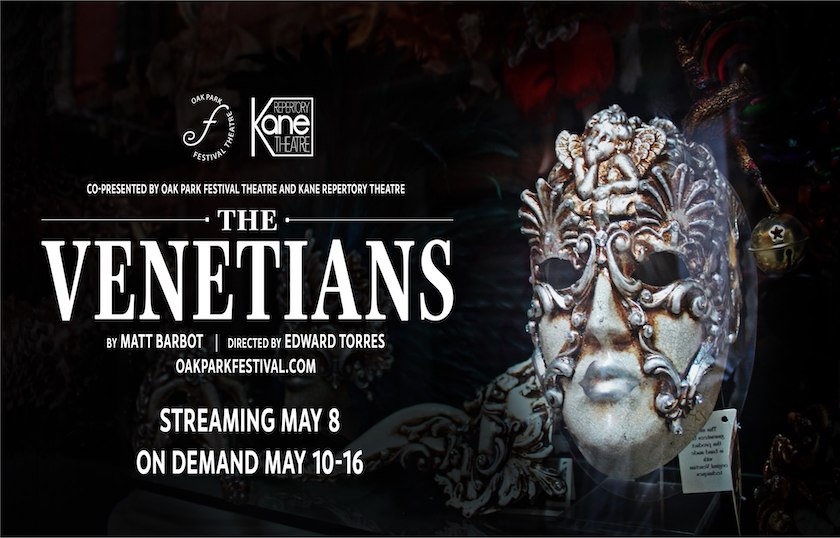 Oak Park Festival Theatre, in partnership with Kane Repertory Theatre, presents a virtual production of “The Venetians,” a new play by Matt Barbot that brings together various characters from several of Shakespeare’s best loved plays to address contemporary issues. Winner of Roundabout Theatre Company’s 2019 Columbia@Roundabout New Play series, the play directed by Edward Torres, premieres May 8 at 7 p.m. and can be viewed on demand through May 10-16.

Othello, the Moorish general, wants to give his beloved Desdemona the beautiful secret wedding she deserves… but that means borrowing ducats. Unfortunately for him, the Jewish moneylender Shylock has spent too long among the terrible people of Venice to see this marriage as anything but a death sentence for Othello. Unbeknownst to Shylock, however, his own daughter has begun an illicit romance that may bring their whole world crashing down on all their heads. A crossover between Shakespeare’s “The Merchant of Venice” and “The Tragedy of Othello,” “The Venetians” uses two classical outsiders to ask questions about immigration, assimilation, national identity and what “acceptance” truly means.

This play is recommended for ages 18 and up.